From experience, I find that these foods frequently trigger problems for me.  Losing pizza and chocolate is especially difficult for me, but they bring problems just too often.

there are also times that I get terrible pains that can last a few hours but don’t lead to a pouchitis outbreak.  I am very suspicious that it is triggered by a food, but not always sure which one.

I’m curious to other peoples experiences.

I find that the foods that  gave me issues before surgery still give me issues.

so I try to avoid large quantities of dairy and gluten. That said, I love red meat, but anything more than 4 oz will cause severe butt burn. I am guessing here that all that fat will cause an increase in bile and a more caustic stool.

I try and stick with foods that cause the least issues.  When I stay inside my self imposed boundaries I have a good QOL.  When I stray not so good.

“Butt burn” — interesting way to describe it.  Yes, I am getting a lot of that lately due to travels and not being able to eat more normal, safe diet.

I just wonder if a cleaner diet plus less stress could have prevented this mess from before surgery.

I read a book called The Body Remembers

I now wonder if all my childhood traumas are related to my IBD/UC and eventual surrender of my colon.

Dairy, wheat, alcohol, sugar, and too much caffeine are all problematic for me.  They don't necessarily cause pouchitis, but they can make it much more likely.  I avoid dairy and wheat.  I have alcohol only occasionally, and I probably have too much sugar in my diet, though most of it is in the form of fruit or honey, so it's not the worst kind.  I have a pretty regular caffeine habit in the form of green and black tea.  I tried to cut down but then I needed to weather the depression/grief caused by my government suddenly removing the basic human right of bodily autonomy to more than half the population in my country.  I may try again to cut down on the caffeine soon.  I am processing this betrayal and starting to feeling less disabled from it.

Dairy & sugar can cause me problems. I order a pizza with half the amount of cheese or no cheese and it doesn't bother me.

The body keeps the score is a really good book! Now for me it’s carrots -Coker raw shredded even the juice it burns and sends  me into the rest room all day

Is "The Body Keeps the Score" different from "The Body Remembers"?  I have read the first one but not heard of the second one.   Raw veggies also make me have the watery stools, though I am OK for the most part with the raw juices, as long as they're not ingested too frequently.

I meant to to say

the body keeps the score

another senior moment today.  Sorry for the confusion.

Yeah for me red meat ,veges and pizza but only because I eat too much of it.

If you really want to bring on a strong pouchitis reaction, try binging on sugar.  I bought some of those Almond Cookies at Whole Foods Market for a ladyfriend,  but she told me she was allergic to almonds and could not accept them (fortunately I also bought her cannolis and cinnamon rugelach, which she happily accepted).  Not knowing what to do with the Almond Cookies,  I ate 5 or 6 of them.  That led to a pretty runny day and the pouch was spitting fire. Unfortunately, this was a big time example of paying the piper for doing what I should not have been doing, which was eating these: 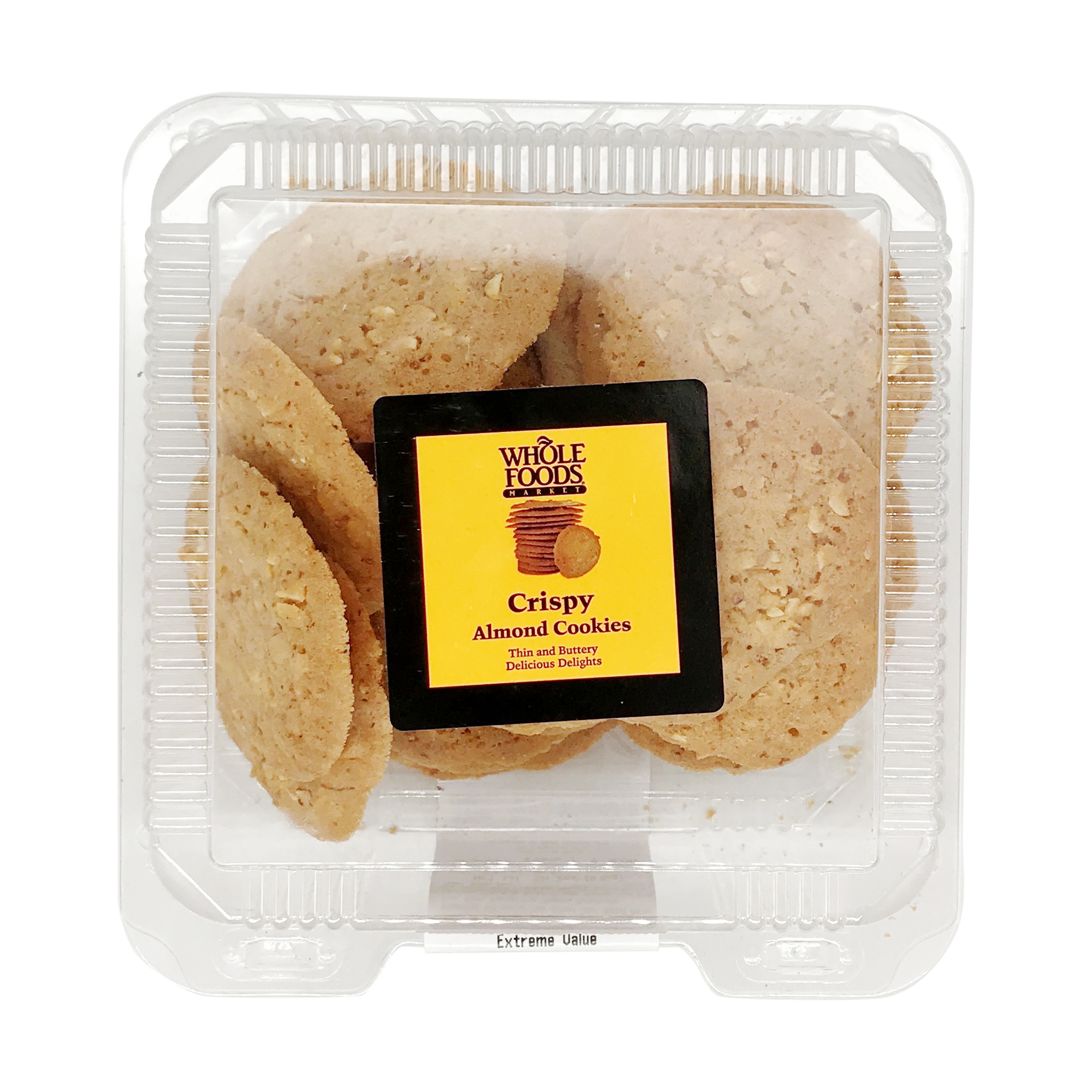 I don’t think there’s any particular food that triggers all (or even most) J-pouchers. If you tend to have off days it’s easy to get superstitious about whatever you ate before trouble showed up.

For myself I can say that there are foods that are likely to trigger inflammation, even if not every time. Already with UC when I still had my colon I reacted poorly to canned sausage. My digestion went havoc afterwards and smelled absolutely disgusting. I had similar reaction to canned fish like mackerel occasionally.

My suspicion is that foods with a high load of histamine are causing me trouble. Those are mainly foods that take some time to mature, like sausage, certain kinds of cheese, fermented foods. Histamine is an inflammation driver. Too much of it is harmful for anyone, so I'm not sure what role it plays for my chronic pouchitis. Doctors usually don't care about that subject.

As I have recently read a post in another IBD forum from someone who could reduce inflammation with an anti-histamine med (desloratadine) I decided to give that a try (only 3 day ago, too early to tell if it helps). Though that person also suffered from hay fever and I do not have allergies myself, so I usually wouldn't go for such a med.

Has anyone had similar experiences or suspicions regarding histamine?

Wow, this is really interesting!  I never knew about the fermented food/histamine connection.  I'm writing here to get tagged when people reply because I'm curious about other people's experience with this.  Thanks for bringing this up!

My friend takes this product for her  IB symptoms.

I get a histamine reaction from any kind of fermented or aged food or any food containing natural or added msg, hydrolyzed additives, yeast extract: examples: sausages, aged cheese (more aging=worse reaction), buttermilk, wine, flavored potato/corn chips, sour cream etc. Fresh tomatoes and avocados, both of which I love, contain natural msg., so can only sneak small amounts at one time. These can cause typical allergy symptoms: red, teary eyes, runny nose. coughing, lethargy and can induce a migraine. Never noticed whether my pouch was affected, however, so am assuming that it wasn't, but the rest of my body surely was. -- Rose --

I have never heard of natural msg.  The synthesized one gives me terrible headaches.  I'm learning so much!

Scollaps are high in protein and low in fat plus have magnesium and potassium.they go with mash potatoes, curries ,burgers etc.peru seems to produce alot of them.

Roseviolet, for me it's the other way round. I have hardly ever typical allergic issues. There were only about 3 times in my life that I had an asthmatic reaction to red wine (rattling respiration from bronchial slime) and only occasionally reddish spots of the skin (at the legs) that are not even itchy and get darker, vanishing after some days.

But if I take into account many of the singular experiences of my IBD history and the foods I avoid - at least to some extent - naturally by now (sausage, tomatoes, aged or mold cheese; I eat only small portions of dark chocolate or the high fat milk products butter and natural cream, little yoghurt being an exception), then I must admit that histamine may play an important role. Though it is diffult do get a grip on it, as there seems to be a certain limit where I can tolerate most foods.

It is now the third time that I come across that subject and both times before I saw some parallels but finally rejected it again with resignation as it is a difficult matter, with so many foods of different kinds either containing histamine or at least setting it free from other sources.

I think I will take it the simple way, eat more fresh foods, avoid foods that promote histamine and continue that med for some time. If I'm able to reduce budesonide without inflammation getting worse, then I should have some more clarity.

Anyone use warm enemas to flush pouch?
49 minutes ago
something found in DH pet scan-small intestine cancer? scar tissue?
2 hours ago

I don’t remember eating glass….
9 hours ago
healing is measured in months and years
14 hours ago

When you block a person, they can no longer invite you to a private message or post to your profile wall. Replies and comments they make will be collapsed/hidden by default. Finally, you'll never receive email notifications about content they create or likes they designate for your content.
Note: if you proceed, you will no longer be following .
×
Link copied to your clipboard.
×
Loading...